The recent announcement of Steve Jobs death, while not totally unexpected given his battles with cancer, was still very sad, disheartening news.
Millions have hailed him for his vision, his innovation, his genius, and for leadership in developing products and services which will continue to influence
our way of life and the way we work for many years to come.  He will be badly missed.

How big is his passing?  Tributes to Steve Jobs began flooded social networks Thursday immediately after his death, with some Apple fans posting images and videos of themselves and the Jobs-inspired products they use. Jobs’ Stanford commencement address in 2005, where he openly discussed the reality of
dying became one of the most viewed YouTube videos that day with 1.5 million viewings.  And on Twitter, shortly after his passing was announced, there were 6,049 posts per second on the subject, topping the 5,008 after the reported death of Osama bin Laden.

After having some time to digest this sad news, I’ve come to realize that even the Yellow Page industry has been affected by this giant.  Our industry is a technology user and the wide range of products Jobs championed at Apple have had a major impact on the industry.

Let’s start with the original Mac PC platform.  The graphic artists in our industry swear by it even to this day.  Its capabilities have allowed our industry artists to create millions and millions of good looking, creative ads which help advertisers present their business to buyers in a superior fashion, well beyond anything they could have created.  Ask those artists whether they would be willing to give up their Mac or their first born, and most will hesitate to answer quickly. 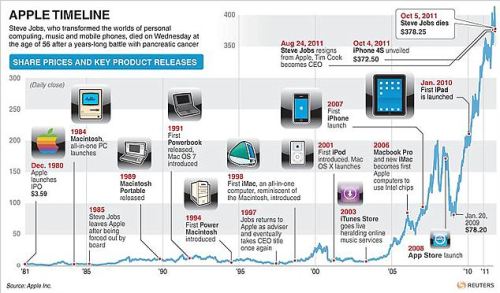 Most recently the development of the iPhone or iPad – have completely altered the ways our industry connects local buyers and sellers.  It has been less than 4 years since the iPhone was first introduced.  Can you even remember a time when we didn’t have such a wonderful mobile device?  The App Store opened even more new ground, and now, just about every Yellow Page publisher offers a mobile app.

A little less than two years ago, had you been asking for this next new technology — a tablet/PC/something more iPad.   The device was wildly popular from the onset with 300,000 iPads being sold on their first day of availability. By May 3, 2010, Apple had sold a million iPads, half the time it took to sell the same number of iPhones.  During an October, 2010, conference call, Jobs revealed  that Apple had sold more iPads than Macs for the quarter.  In total, Apple sold more than 15 million first generation iPads prior to the launch of the iPad 2.  There appears to be no end to the growth of these devices as competitors have jumped in with their versions.  And the impact to the Yellow Page industry?  Some publishers now have their salespeople across the country relying on them to facilitate the entire sales experience, everything from prep to completing contracts with their advertisers.  A more robust Yellow Pages experience will also follow for these powerful devices.  The possibilities appear to be endless.

Beyond just the devices and services, let’s not forget how Apple under his tutelage has also seen a meteoric rise in stock price, rising some 53%
in 2010 only.  If you have money in a mutual fund, most likely you also owned some Apple stock through the fund and have profited.

While it may be time to say goodbye, it’s also time to say thank you Steve Jobs.  Steve, we are already missing you…….